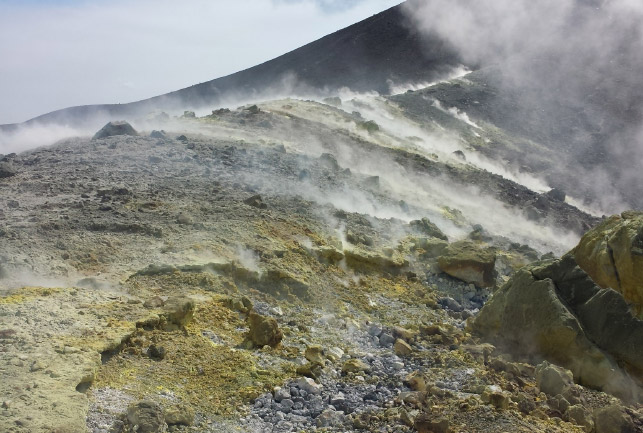 “Hierà is an Aeolian red wine produced by Hauner with grapes from the island of Vulcano. Last June I tasted it for the first time at Carlo Hauner Junior’s winery in Salina. I was also able to taste and compare the vintage 2006, currently on the market, with the vintage 2007 coming out in Spring 2009. Moved by this tasting I decided that I had to go at all cost to see the vineyard in Vulcano. My old passion for small-island winemaking is still alive and in July, while I was on holiday in Lipari, I took the opportunity to go. So with the help of Stefano Mirenda, the manager of Hauner’s vineyard in Vulcano,  I was able to spend a little time at the vineyard.

You realize as soon as you arrive in the port that Vulcano is a particular place: the Vulcano sulphurous fumes don’t leave you with any doubts. On the other hand why would you expect it to be any different. According to Greek mythology this was the island of Hephaestus, the god of fire and metalworking. In his “volcanic” workshop toiled three dark skinned Cyclops- three giants called Steropes, Brontes and Arges. They were smoky and dirty with sweat and travelled incessantly between the ravines connecting Etna, Stromboli and Vesuvius to collect the metals to forge the powerful darts for Zeus. In short “strong stuff”. Aside from the sulphur smell, the colors, the sparse vegetation and the morphology give the impression of a place on the edge. The Vulcano island as you see it today is the result of the “soldering” of the eruptions from the four volcanoes : Lentia, Vulcano Piano, Vulcanello and Gran Cratere. This last one is still active and lets out fumes.

The island was uninhabited for many centuries but exploited in the 1800’s as an open air mine to extract sulphur, alum, ammonium chloride and pumice stone. The credit for viticulture goes  to a Scotsman, Sir James Stevenson (1822 – 1903) who acquired a large part of the island in 1870 and further developed mining. He planted the first recorded successful grapevines on Vulcano and contributed to the growth of the vegetation with fruit trees and lots of fig trees. However, the volcano erupted unexpectedly on the 3rd of August 1888 killing the “plebs” that worked in the crater. The eruptions continued until March 1890,  burying a good part of Stevenson’s work under sand and ash. Stevenson, seeing the dire situation, got on board his steamboat, the Firefay, made course for England and never came back again.

Only a few “vulcanari” (the name given to the inhabitants of Vulcano) remained on the island and were mainly farmers and shepherds. In fact sheep and goat farming is still today one of the few remaining agricultural activities. One cannot compare these pastures to the lush greenery of Valle Padana in northern Italy but the goats are contented with whatever they find. Today’s viticulture is thanks to Carlo Hauner Junior, who in 2000 planted grape shoots in the Piano area, an upland fertile pasture on a plateau in the northeastern part of the island. He planted two hectares of Nero d’Avola, Alicante and Nocera as well as a few rows of Grillo at 400 metres above sea level.

It wasn’t easy to plant on Vulcano. The soil was covered  by a hard compact crust that had to be crushed. The soil was also deeply infiltrated with sulphur that prevented many of the small grape shoots  to take root. While in Salina a major obstacle is oidium, a powdery mildew, in Vulcano such treatment is minimal. The rainfall is approximately 500 mm a year but plant growth is favoured by the humidity which condenses overnight: the average yearly level is 76%.

The danger to the vines is not the cryptogams, but the goats, wild rabbits and all kinds of birds. To protect the grapevines from land predators fine wire mesh fences are used to surround the entire vineyard whereas against air “attacks” there is no defense. To sum it up the grapes don’t have much of a chance. I love this wine because it is the sum of all of the things that I experienced in the vineyard on the island of Vulcano.

The Hierà Rosso IGP 2006 is made with grapes of Nero d’Avola (60%), Alicante (30%) and Nocera (10%). It has a deep ruby red colour with purple reflections. A nose of blackberry jam and ripe red fruit is intense with a hint of spice. In the mouth the wine is full-bodied with just enough alcohol to sweeten the tannin. On the palate a lingering taste of spice and licorice give a particular and unique volcanic note.

The wine’s name is an historical Greek name for the island of Vulcano which means “sacred island”. The wine’s label is a reproduction of a painting from 1978 called “Sciara del fuoco” by Carlo Hauner Senior, which represents the lava flow of the volcano of Stromboli.