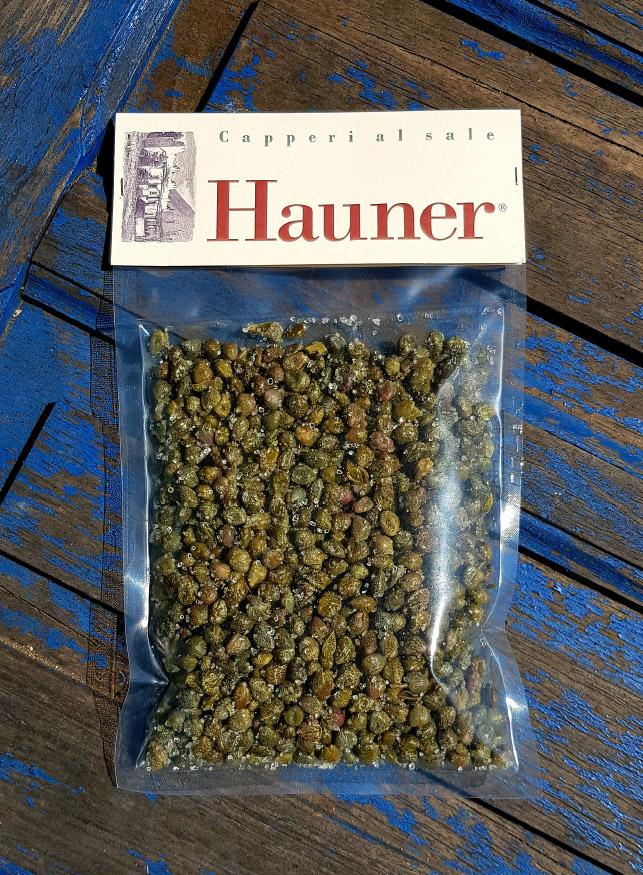 The caper comes from a bud, the bud of a beautiful flower. Like an orchid, it explodes at sunset. "When we eat a caper, we are eating a flower with its elegance and perfume."

The caper is probably of tropical origin. It is known that the Arabs called it cabir, the Greeks kapparis, the Romans capparis, and that it existed as early as 5,800 B.C.

In more recent times the Greek philosopher Aristotele, the most gifted of all the Greek philosophers, and Teofrasto, his favorite student and author of The Story of Plants, spoke of capers. Between the fifth and fourth centuries A.D. still in Greece before them, Ippocrates, the father of ancient medicine, spoke of the capers' curative properties.

Evidently it was not sufficient to recognize the capers' medicinal capacity or gastronomic special quality. Prassitele, one of the greatest Athenian sculptors of the IV century A.C., administered capers in the form of cosmetics for the beautiful Frine, a courtesan and model, immortalized by the same Prassitele in the celebrated statue of Aphrodite, as we learn from school as being none other than the Greek name for Venus.

From May to the end of August, buds appear on every plant once a week and open up. The future capers will be spread out to rest for one or two days in a cool, shaded place (otherwise, they would flower in the sunlight). The Aeolian houses with their terraces are ideal for this, ventilated and covered in cane. The flower left on the branch withers rapidly and develops a berry a few centimeters long that assumes the form and color of a small cumber. For botanists, it is the fruit that contains the plant seeds, for the Aeolians it is the cucuncio, created by nature for the delicacy of our palate.

As soon as they are ripe, either the capers or cucunci, are very bitter but this unpleasant character goes away with salting or curing, which begins alternating a layer of capers with a layer of sea salt in a tub. After two or three months and repeated salting, the capers are ready for consumption and preservation.